Writing a discography of Tristan und Isolde almost feels like being a composer yourself. Not only because there are so many recordings (no less than fifty, eleven of which are on DVD! and those are just the complete commercial editions that are still for sale!, add to that the countless editions of highlights, the pirates, videos on Youtube …. ), but also because it is an opera that will completely drain you emotionally.

But I did my best. I listened for hours to the many Furtwänglers, Böhms and Karajans (and there are many!), dusted off Artur Bodanzky… visited Janowski and Barenboim…. only to conclude, after a few weeks of almost continuously dying hundreds of Love Deaths, that were I to be banished to a desert island with only one recording, it would undoubtedly be the 1982 version under Carlos Kleiber (DG 4775355).

Margaret Price is an unforgettable Isolde. Her silver-like lyric soprano sounds very feminine and pure in its vulnerability. Oh, she is strong too, and determined, but her feminine side prevails. An Isolde to fall in love with.
René Kollo lacks a little brilliance, but otherwise sings a good Tristan. It is a pity about Fischer-Dieskau, his Kurwenal is not really the best, but Kurt Moll is a fantastic Marke and Brigitte Fassbänder ditto as Brangäne.

But the conductor! How wonderful he is! From the very first distant sound to the last chord, with my eyes closed I completely immerse myself in the orchestral sound. Breathtaking. No, more than that: hypnotic.

A few years ago, the company The Intense Media released a Furtwängler box set, with live recorded operas on no less than 41 CDs. Apart from one stray Verdi (Otello with Ramón Vinay from Vienna 1951), all are German: Mozart, Gluck, Beethoven and von Weber. And – how can it be otherwise? -, a lot of Wagner, his music is on no less than 24 of the 41 CDs.

Tristan und Isolde are present no less than three times, in fragments from three different performances.

The recording from Vienna in 1943 with Max Lorenz and Anny Konetzni, famous among the diehards, also contains some added fragments with the same cast from 1941. A mistake, of course, but for many still an important document.

I myself have a lot of trouble with this part, which is why I quickly went through it and continued with the fragments recorded in 1947 in the Admiralspalast in Berlin, with a truly excellent Tristan sung by Ludwig Suthaus. There are few basses that can match Gottlob Frick (Marke), Erna Schlüter is a fine Isolde and Margarete Klose a very good Brangäne. The sound is unfortunately not beautiful, but a real Wagnerian does not mind that too much.

Less exciting perhaps, but the opera becomes really inimitably beautiful in the studio recording from 1952 (Naxos 8110321-24). Ludwig Suthaus is here also, but only now do you hear what a fantastic Tristan he was. He was now partnered with an Isolde of his own stature: Kirsten Flagstadt.

The young Fischer-Dieskau is a beautiful Kurwenal, Josef Greindl a brilliant Marke and Blanche Thebom a very attractive, lyrical, Brangäne.

But the orchestra is the most beautiful of all: in this recording, you really hear what a fantastic conductor Furtwängler was! Also remarkable: in the small roles of the sailor and the shepherd you can hear Rudolf Schock…. Yes… those were the days!

I am not such a fan of Martha Mödl singing Isolde. I admire her enormously, though! Her stamina is inexhaustible and her powerful voice can only be compared to a laser beam that cuts mercilessly through all the walls until nothing remains standing. Hurricane Irma is nothing in comparison.

The performance recorded live in Bayreuth in 1952 sounds quite sharp, making her voice seem even louder and bigger than usual. There is a lot to be said for that; no one had to turn the volume up because what you hear is pure nature. Even Karajan and his orchestra cannot compete with her! Legendary, yes, but I hear so little love in her interpretation! This  in contrast to Ramón Vinay’s Tristan, he may be a little less powerful, but he sounds very warm and romantic.

The latter is for me the main reason to cherish the recording, but I also like the rest of the cast very much. Ida Malaniuk is an attractive Brangäne, Ludwig Weber a good Marke and Hans Hotter a somewhat heavy but otherwise beautiful Kurwenal.

The performance recorded in August 2007, directed by Nikolaus Lehnhoff, is in all respects one of the most beautiful Tristans. For the first time in my life, I completely surrendered myself to the opera. Without any regrets, by the way.

Lehnhoff took Isolde’s words: ‘Im dunkel du, im lichten ich’ as the starting point of his staging, and his play with dark and light (and with space!) results in an extraordinarily exciting and beautiful stage setting. The costumes are a kind of mixture of medieval simplicity and contemporary glitter.

Nina Stemme is literally and figuratively the most beautiful Isolde one can imagine. Her creamy, sensual soprano with its many colour nuances sounds like a balm for the soul. All her notes sound natural and effortless, as natural and bittersweet as love itself.

Robert Gambill’s voice may not quite meet the heavy demands of the part, but he portrays a very charismatic and committed Tristan. Katarina Karnéus (Brangäne), René Pape (Marke) and Bo Skovhus (Kurvenal) also sing and act in an excellent manner.

The conductor (an amazingly good Jiří Bêlohlávek) persuades the orchestra to produce the most beautiful colours as he builds up a thriller-like tension. The opera, which lasts more than four hours, is over in no time at all. That is real Art. Highly recommended. (Opus Arte 0988 D)

In 1973, Lehnhoff directed a then very high-profile production of Tristan in Orange. The production is simple and timeless and, frankly, a little dull.

But the leading roles are sung by the then 55-year-old Birgit Nilsson and Jon Vickers and it is conducted by Karl Böhm, which makes the whole thing a document of note. The picture and sound quality is poor, but that will not deter the true music lover (Hardy Classics HCD 4009).

The performance of ‘Tristan’ in 1981 marked the debut of Barenboim and Ponnelle in Bayreuth. Their collaboration resulted in immense success, and both the audience and the press were wildly enthusiastic. In October ’83, the performance, this time without an audience, was recorded on video (DG 0734321).

Ponnelle’s splendid staging is a fine display of magic realism; with much symbolism, subcutaneous eroticism and dreams, where the real world turns out to be an imagination. The last act takes place in the head of the delirious Tristan: accompanied by Isolde’s Liebestod, perhaps the most beautiful music ever written, he dies in the arms of Kurvenal.

It is the first time I see Johanna Meier, and the encounter is not entirely satisfactory. Admittedly – she looks beautiful, acts well, and I have no complaints about her singing, but it all sounds so artificial … You can almost hear her work so very hard, and I don’t like that. But maybe I am wrong, and there is just no chemistry between her and me? There is no lack of the latter between her and Tristan: a bit dry sounding, but otherwise fine singing, René Kollo. Matti Salminen is irresistible as Marke and Hanna Schwarz is a truly phenomenal Brangäne.
A magical performance.

The opening night of La Scala with Tristan und Isolde directed by Daniel Barenboim and Patrice Chéreau, with Waltraud Meier in the leading role… Yes, that raises expectations. The reviews were not entirely positive, but I was enthusiastic about it, and now that I have seen the production again, I still am.

First of all, there is Chéreau’s intelligent and very humane directing and Richard Peduzzi’s sober but so ‘to the point’ stagecraft. The costumes and sparse sets are very medieval and through small details a suggestion of reality is created. For me, this is an example of how, with the use of tradition, a truly modern performance can be put upon the stage.

The direction of the characters is excellent. Chéreau knows like no other how to turn his theatrical characters into people of flesh and blood. It is not a fairy tale or a legend, everything is actually happening and the ‘everlasting kiss’ does indeed last forever.

Waltraud Meier sings (and acts!) a warm-blooded Isolde, Michelle de Young is a very convincing Brangäne, Gerd Grochowski a formidable Kurwenal and Matti Salminen as Marke is already an icon. But I was most surprised by the then unknown Ian Storey as a solid Tristan (Warner Classics 0825646055005). 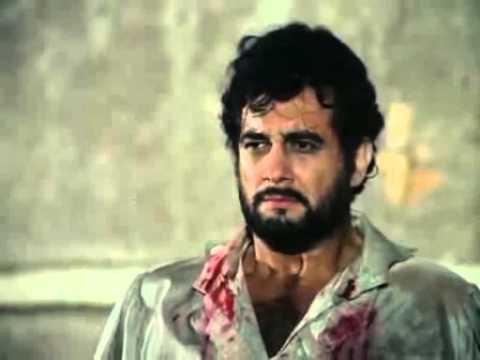 Ernestine Schumann-Heink as Klytämnestra at the January 25, 1909 Dresden premiere of Elektra, looking down on Annie Krull as Elektra