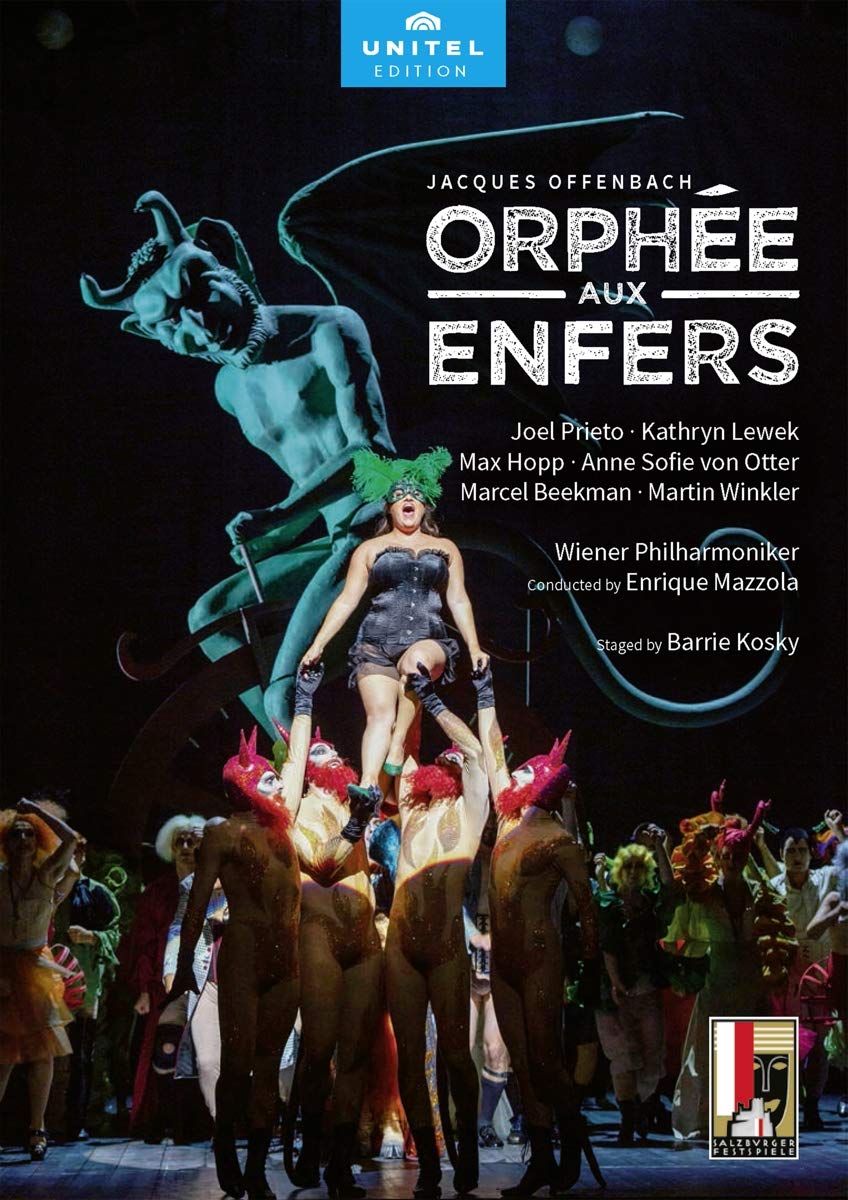 Marcel Beekman flies around the world to perform, as far as the Middle East. The tenor cannot be praised enough. We knew (or should have known!) for a long time that he is an all-rounder in his profession. His voice seems to know no boundaries and sometimes climbs esoterically high, but with a spectrum of colours. He doesn’t only feel the music, he sometimes seems to be connected to it in a compelling way.

According to Calliope Tsoupaki, the new Composer Laureate of the Netherlands, he is the best Dutch tenor. And she should know, because he has sung in many of her compositions. She composed the 1-minute opera Vesuvius 1927 for him, based on the text of P.F. Thomése, which had its premiere on the Dutch TV show ‘De Wereld Draait Door’:

But he also sang in her famous St. Luke’s Passion and saved the performance of her Greek Love Songs, performed at the Holland Festival in 2010. In June 2014 he also appeared in her opera Oedipus

And now she is composing a big new work for him – and for the countertenor Maarten Engeltjes. In addition to the singers, an instrumental ensemble, PRJCT, Maarten Engeltjes’ own ensemble, is also taking part. This work will have its premiere at November Music 2019 and may be programmed in other cities as well.

Other Dutch composers such as Jeff Hamburg, Elmert Schönberger and Martijn Padding (to name but a few) have written compositions with his voice in mind as well.

The first time we met five years ago in his beautiful house in the Blaeu Erf, a kind of courtyard in a side street of the exceedingly busy Gravenstraat, right behind the Nieuwe Kerk. It is an oasis of peace, where hardly any sounds penetrate. We had tea (his secret mixture, which tasted very good to me) and talked about his early years, the discovery of opera and his many foreign performances, which even brought him to countries in the Middle East.

“I come from a provincial town and studied at a small conservatory, which meant that I was actually destined to become an oratorio singer. Or a teacher. At that time, no one thought of opera, not even I did. That only came when I was asked to do the opera/musical Jona de Neezegger by Willem Breuker. It came as a bit of a shock and I started to develop a taste for it. I wanted more!”

You sing both old and new music. Did you consciously choose to do that or did it happen that way?

“I am indeed fluttering between the old and the modern. I’m pragmatic and communicative and I find it particularly exciting to work on a new score. The aspect of the new is like creating a new prism. You are not only a performing medium, but also a bit of a creative artist. It’s also nice to be able to talk to the composer, and yes – they also want to listen to you and change the notes. Sometimes I ask for extra high notes, they laugh about that, they like it.”

“I don’t mind being a kind of ‘tool’ in the hands of a composer, so if I’m required to be non-vibrato then I will. And I have to honestly say that sometimes I find it very beautiful, it has something pure, something natural.”

“Let me start with a cliché: rehearsals can be very different. The real eye-opener for me was Salome under Simon Rattle at the Salzburg Osterfestspiele. Rattle wanted us to come to Berlin first to read the score. That worked really well, because most of the time you hear the orchestral sound for the first time when the first ‘sitzprobe’ comes. A revelation.

I used to like Stuttgart, especially working with Jossi Wieler and Sergio Morabito. They are friendly, everything is done with mutual agreement and the atmosphere is pleasant. And – most important of all – they are so very respectful. Not only does that make things pleasant, but it also makes you open up. When you are treated like this, your heart opens and you want to do everything for them. The other way around, your door closes, and then you shut down. Of course you cooperate, you have to open up, otherwise you might as well sit behind the cash register at Lidl.”

As Hauptmann in Wozzeck at DNO © Ruth Waltz

In the 2016/17 season we were able to admire Beekman in two major productions at the National Opera in Amsterdam: Wozzeck by Alban Berg and Salome by Richard Strauss. Especially Wozzeck, in which he sang both the Hauptmannn and the Narr, was very important for the tenor in that season, the recording of that production was recently released by Naxos (21110582).

Today, Beekman is one of the most famous and sought-after character tenors in the world, with a busy schedule. His 2019/2020 season has just been revealed and it’s indeed full He mentions the most important productions:

“In 2019 I will sing Pluton (Orphée aux Enfers by Jacques Offenbach) in Salzburg, in the new production of Barrie Kosky, the Australian director who is best known for his work at the Comic Oper in Berlin. The premiere will be on August 14th during the Salzburger Festspiele. Enrique Mazzola conducts the Vienna Philharmonic and as colleagues I get a.o. Kathryn Lewek (Euridice), Joel Prieto (Orfeo) and Anne Sophie von Otter (L’Opinion Publique). I’m really looking forward to that. I’ve never worked with Kosky before but I really admire his work. And then the idea that there will be an operetta in Salzburg! And of course Pluton is a real role for me.”

“German composer Christian Jost is currently writing the opera Voyage vers l’Espoir in which I will perform several roles. The premiere will take place at the end of March 2020 at the Grand Théâtre de Genève”.

In 2019, Les Arts Florissants celebrates its 40th anniversary: the reason for William Christie to program a grand international festive tour in December 2019. The programme includes works by Lully and Rameau, among others, and in addition to Beekman, several soloists, including Sandrine Piau and Christophe Dumaux, will be present.

Rameau’s Platée, directed by Carsen, one of Beekman’s biggest roles, will be performed in three different countries in December 2020. Unfortunately, the Netherlands is not one of them. His other starring role, Nutrice (L’Incoronazione di Poppea by Monteverdi from Salzburg 2018) has fortunately been recorded for DVD and will be released by Harmonia Mundi in September 2019.

His schedule also mentions many separate projects, including a tour with Israel Camerata in June 2019 with the 1940 Cantata for Shabbath by the Israeli composer Mordechai Seter (1916-1994).

Beekman: “I look forward to that. I love that country and every time I’m there, there’s a bit of recognition”. “I’m looking into my past. It is not for nothing that I feel so at home in Israel. The Jewish, that appeals to me. Is there anything in the past? There was once a Beckman, with a “c”… But does it matter? Not really. I feel involved with minorities”.

“I’ve refocused my accents and changed my priorities, adjusted them. That included selling Blaeu Erf. I don’t care about the money, I sold the house to live, to enjoy. I don’t have a partner and do I want one? I don’t know, but I am happy this way: my life is on the right track and it brings me what I love most: music, art, life! It took me a while to find my way, but as a character tenor I am able to conquer the world!

For the complete schedule of Marcel Beekman see his  website.

Offenbach aficionados may rejoice. Here is the first complete recording of his opéra comique in 3 acts, 4 tableaux, Fantasio It is based on Alfred de Musset 1834 stage play of ther same title. The musical version was not a big success at the time of its premiere at the Salle Favart in Paris, in January 1872, but like so many Offenbach titles, Fantasio was nonetheless produced at the Theater an der Wien a month later, it was also seen in Graz and Prague in October 1872, and Berlin in 1873. A revival, in a new version, was mounted in Magdeburg in June 1927 as Der Narr der Prinzessin. Then, it seems, it was forgotten for a long time.

Offenbach later re-used the chorus of students from the first act of Fantasio in The Tales of Hoffmann, where it becomes the famous student chorus in the prologue, and the voice of Antonia’s mother in act 3 of Hoffmann enters with a theme from the overture of Fantasio. So at least two tunes from Fantasio have become very well known, in a new context.

12 years ago, Anne Sofie von Otter recorded two numbers from Fantasio for her wonderful Offenbach album on Deutsche Grammophon. I remember thinking, back then, how much I would love to hear the complete score after von Otter’s dazzling rendition of the “Ballad to the Moon” and the big love duett. What fascinating music!

It was only a question of time, I guess, till someone heard my prayers and answered them. Master of Offenbach reconstructions, Jean-Christophe Keck, had also taken an interest in Fantasio. It had been revived in October 2000 at the Opéra de Rennes in a version reassembled by him. The production by Vincent Vittoz went to Tours as well, then onto Nantes and Angers. The show was also performed at the summer festival of Opernbühne Bad Aibling in 2003.

Keck argues that one reason for the long neglect of Fantasio was that it has been difficult to locate a performing edition; only a vocal score was published at the time of the premiere, along with a “corrupt” and re-orchestrated German version.

Keck went back to the first Parisian version from 1872. His “final” re-assembled score was performed live in December 2013 London, in a concert organized by Opera Rara. They then sent their team into the studio to record the show. Just in time for christmas, the label now released the double disc. Thus making Fantasio available for all the world to hear.

The story, in a nut shell, is this: to be close to his love, Princess Elsbeth, the young Munich student Fantasio dresses up as a court jester and enters the palace. En passant he stops the war with Mantua (on the other side of the Bavarian Alps), a deed for which he is given a royal title in the end.

Sarah Connolly is a warm, melancholic and at times decisive Fantasio. Not particularly “Bavarian,” nor typically French. But a joy to listen to. As her Elsbeth, Opera Rara could not have chosen a more beautiful soprano voice than Brenda Rae. In their big duet, the voices melt into one, caress one another and glow next to each other. It is breathtakingly beautiful to listen to them!

All other soloists are also wonderful to listen to, I find, together with the great Opera Rara Chorus they are fabulously accompanied by Sir Marc Elder and the Orchestra of the Age of Enlightenment.

All of you who enjoyed L’Etoile (1877) at De Nationale Opera in Amsterdam: listen to the number “Quand l’ombre des arbres,” that starts with the chorus and is followed by Elsbeth’s aria “Cachons l’ennui” at the start of act 2. You’ll realize where most of Chabrier’s great ideas come from. For operetta and Offenbach fans, this double CD is a must have.

For the oiginal Dutch/ versie in het Nederlands: