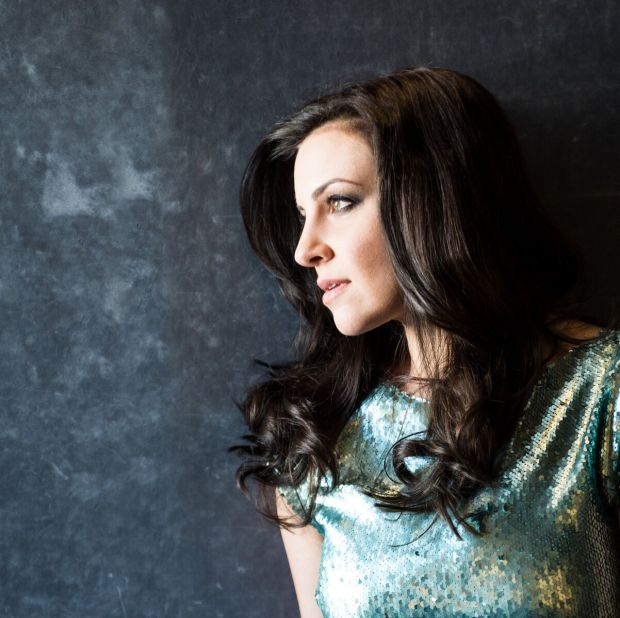 The first time I met Joyce El-Khoury was by coincidence. We happened to sit next to each other during opening night of Gounod’s Faust at the National Opera and started an animated conversation, which continued during intermission and after the opera had ended. We got along so well, in fact, that we soon made an appointment to continue our conversation elsewhere.

A few days afterwards we meet at an almost deserted outdoor café on Rembrandt Square. The weather is gorgeous – the sun reflecting itself in our wine glasses. El-Khoury loves Amsterdam, and cannot get enough of the city.

In November 2014 El-Khoury will return to Amsterdam for Musetta (La Bohème) and the prospect to spend six entire weeks there already makes her happy. She immediately discards my remarks on the weather in November and December.

“I simply love the city, regardless the weather. The atmosphere is unique and the people are so friendly! I love Amsterdam.  Everyone is free here, or at least seems to be. The city is a huge inspiration to me. The only problem are the bikers, they scare me a little!”

The Canadian soprano, born in Beirut, is a star in the making. Opera News wrote about her: “Canadian Soprano Joyce El-Khoury’s sound is enormously satisfying — a full lirico-spinto soprano with a genuine radiance about it”. 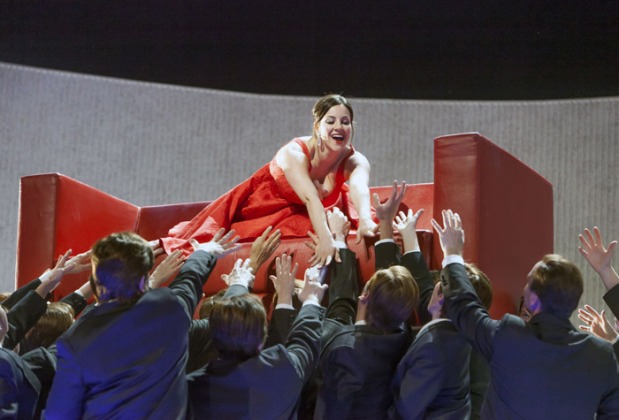 As Violetta (La Traviata) at the Dutch National Opera

The Dutch public can attest to this. In May 2013 El-Khoury made an unexpected and overwhelming debut as Violetta in La Traviata at the National Opera. In May 2014 she stole the hearts of the NTR Saturday Matinee audience with a deeply moving performance of Rusalka in Dvorak’s opera of the same name.

“The Matinee is even better than sinking into a warm bath. The public is so incredibly sympathetic and kind, you can feel their love, which really makes you feel good, feel loved.  You feel like … no, this feeling cannot be described. Also the organisers, the rehearsal assistants … The most beautiful moment to me came when the orchestra started to play and our voices blended with the sound of the orchestra for the first time.”

“And then we had James Gaffigan to conduct us …. I have no words for him. He breathed along with us. He was one of us, and stood above us at the same time. But also next to us. This Rusalka has been the highlight of my life thus far. Singing is a privilege, but singing at the Matinee in Amsterdam. I had the time of my life…”

Joyce El-Khoury was born in Beirut and moved to Canada when she was six years old.

“I am a Canadian and I feel at home in Canada, but my soul, my heart, my everything stayed behind in Lebanon. Most of my family, for example, lives there. If my grandparents would not spend half of their time here, and half the time in Lebanon, I would miss them terribly. My heart is Lebanese, and I hope to spend some more time there one day.

“My father had a beautiful voice, but it was my grandfather George who was the famous singer. Well, famous, when he walked down the street people yelled Kyrie Eleison at him. I sang in the chorus as well, it helped me a lot when we first settled in Ottawa. Everything was new there, and I missed Beirut terribly, but singing comforted me.”

“I never thought about making singing my profession, I wanted to be a doctor. Or a nurse. I even worked in a children’s hospital for a while. My parents did not think that was a very good idea, though. “You have such a perfect and beautiful voice, you really need to do something with it” they said. They not only stimulated me, but also helped me to find my path in the manner that suited me. Unconditional love, indeed.”

“I function best under stress, I need to be challenged. I am sort of a workaholic: even on vacation I always take my score with me.”

El-Khoury’s current repertoire includes many classical and less famous roles by composers like Donizetti, Verdi and Puccini. Language does not seem to play a role for her.

“I have been very lucky: languages, to me, come quite easily. Learning a language almost goes by itself, it is all very natural for me. Maybe because I was raised bilingual (Arabic and French), with English added later.

I have an affinity with languages, and I love to sing in Czech or in Russian. “

“Rusalka is in love, like someone who is in love for the first time. She dreams and believes her dreams are the truth. She is invisible to the prince, nothing more than a wave. She can only be united with him in the foam on the waves, but she wants to be seen too!”

“I am not sure whether the prince loves her…. I think he is fascinated by her. She is a great unknown, a beauty, a mystery. But she does not speak, so he does not know what to think anymore. You may think that is horrible, but you can hardly blame him. She is weird, which scares him a little.”

“Rusalka becomes truly human the moment she forgives. By forgiving she transforms into a human being. I think the opera enables us to study human emotions.” 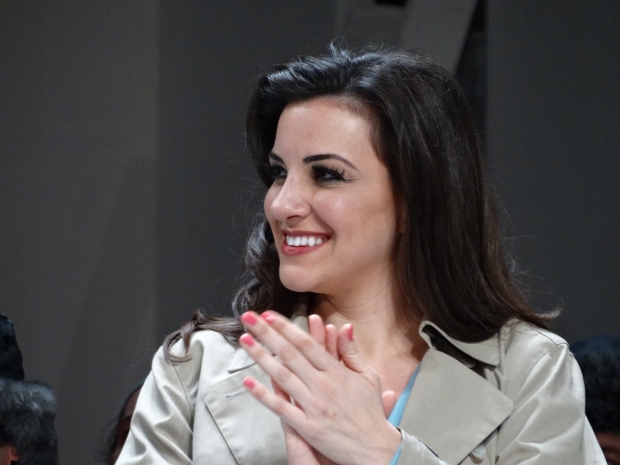 “There is not a lot of difference between Musetta and Mimi, I think. I have sung both parts, and I love them equally. Musetta may appear more superficial, but she is not. She is just better at hiding her emotions and feelings. To the world she is happy and strong, and a big flirt as well, but inside she is a little bird. She genuinely loves Marcello, and is afraid of being hurt. It all shows in the final scene.”

With Michael Fabiano during rehearsals for La Boheme in Ottawa, El-Khoury sings Mimi

“The most emotional moment in the opera, to me, comes in  the second act, when Mimi says: “”Io támo tanto.”  My voice always breaks there for a moment.”

“I need to feel something. I need to have a connection with a role, and understand the character. I have to be challenged emotionally. When I do not feel anything, it  becomes too mechanical and detached. I also think you need to keep your emotions in check, though, however hard that may be. Otherwise your throat blocks, and you cannot sing.”

When I am banned to the moon and can only take one opera with me that would be Suor Angelica! For the drama, but also for the music. The music comforts me, and gives me a warm and good feeling. And then there is that beautiful ending,  the wonder that everything ends well!”

“This role also brought me where I am now. I was hired to sing Loretta in Gianni Schicchi during the Castleton Festival in 2010, but I was also the understudy for the singer who sang Angelica. She fell ill during opening night, and very gladly I took over. Under the circumstances they reversed the order: first Schicchi and then Angelica. Maestro Lorin Maazel was most helpful.”

“Later Maazel took me to Munich and even to China! I will miss him terribly: he was my mentor, teacher, supporter and friend.”

“I have learned a lot from Renata Scotto, mainly about body language: the things you do when you not sing. We have worked together in Palm Beach on a Traviata she directed in which I sang the lead. “

“I sang my very first Violetta in 2012 in Wales, then Amsterdam followed. I thought the Amsterdam production was very beautiful.  I had watched the DVD many times, and understood the clock straight away, but the business with the couch had to be explained to me. I thought it was a tremendous experience.”

What is your dream role?

“Thaïs! Preferably with the gorgeous costumes they had in Los Angeles. I also love Butterfly. The part lies slightly higher than other Puccini roles, but I think it suits me. I also want to sing all three Tudor queens.” 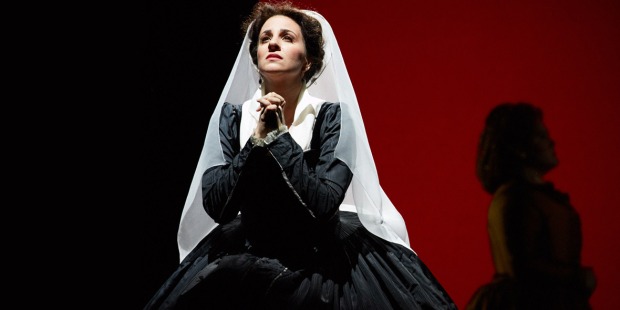 As Maria Stuarda in Seattle