For most Russians, the Volga, the longest river in Europe, is the symbol for everything, including life itself. It is celebrated in many songs, and in many stories and poems it plays the leading part.

In Ostrovsky’s Storm, on which Janaček’s opera is based, and also in the opera itself, the river mirrors the soul of the unhappy Kát’a , whose life ends in the Volga. You can hear the river in the music also.

Robert Carsen understood this very well; in his 2004 Antwerp production he had the entire stage covered with water and the story played out on platforms. I thought it was the most beautiful production of the work ever. It was taken over by the Teatro Real in Madrid in 2008 and released on DVD not long ago (Fra Musica 003).

I must honestly confess that I was really scared to see it again. Would I still find it so very beautiful? The answer is a resounding yes! It is even more beautiful than I remembered it.

Karita Mattila is a Kát’a to fall in love with and Jiří Bělohlávek is, next to Mackerras, the best advocate for the opera. Do you want my honest opinion? Buy it, because it is as beautiful as it gets!

Believe it or not, to most opera lovers Kát’a Kabanova belongs to the standard repertoire, but in Salzburg it was not performed until 1998. The fact that the production was received with mixed feelings at the time, was not due to the music or the singers, or the orchestra or the conductor.

Sylvain Cambreling took care of Janaček’s  masterpiece with the necessary love and understanding. The overture already made my throat close and my eyes fill with tears.

But alas, there was also a director. Marthaler set the action somewhere in the Eastern Bloc of the 1960s, clearly drawing his inspiration from the Czech film hits of the time. Those who have ever seen Miloš Forman’s Love of a Blonde know what I mean.

There is no river anywhere (a picture on the wall does not really count) and that is something I find absolutely unacceptable, because Kát’a  Kabanova without the Volga is to me like Die Zauberflöte without the flute.

A lover of modern, conceptual directing theatre might enjoy it though, because musically it is really well put together. It is clear that he had a particularly long rehearsal time at his disposal: the singers were moulded into a formidable ensemble.

The singing was also superb. Angela Denoke portrayed a vulnerable Kát’a and Dagmar Pecková shone as the rebellious Varvara. David Kuebler and Rainer Trost were perfectly cast as Boris and Kudrjas respectively, and they all deserved their bravos. For us Dutch, it is also nice to see our own national pride, Henk Smit, in action.
In the struggle between direction and music, the latter won.

Lehnhoff belongs to those directors who like to give their own twist to a performance, but in Glyndebourne he delivered a rather traditional production (Arthaus 100158). Very austere, but with great attention to detail and to the psychological development of the characters.

He emphasises all aspects of Kát’a’s character, including her piety, penetrates deeply into her tormented soul and makes her misery palpable. There is a feeling of complete abandonment, which is reinforced by the beautiful, bright colours that are sometimes strongly reminiscent of paintings by Münch.

Musically, too, there is no reason to complain: Nancy Gustafson is a wonderful Kát’a and Barry McCauley an excellent Boris.

Third act of the opera:

Both CD recordings conducted by Charles Mackerras starring respectively Elisabeth Söderström on Decca (4218522) and Gabriela Beňačková on Supraphon (SU3291-2 632) are very good and I would not like to miss either of them, although I have a slight preference for Beňačková .

Peter Straka is as credible as Petr Dvorsky as Boris and Nadĕžda Kniplova and Eva Randová (Kabanicha) are a match for each other. 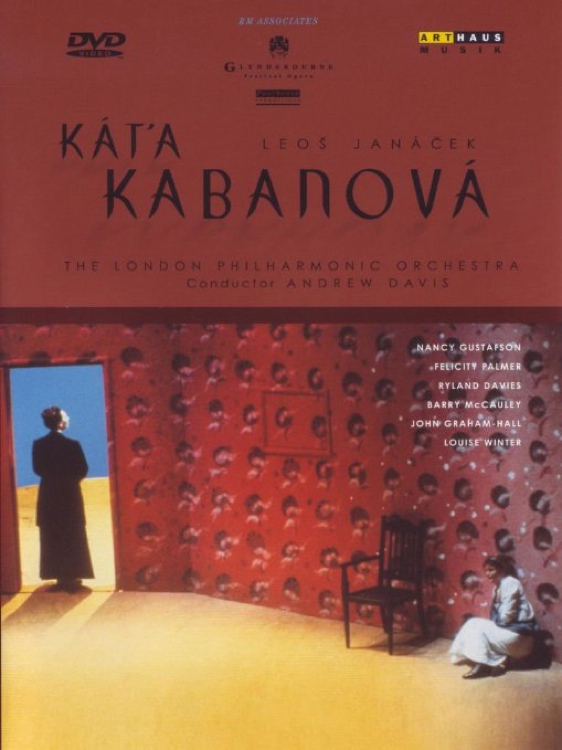