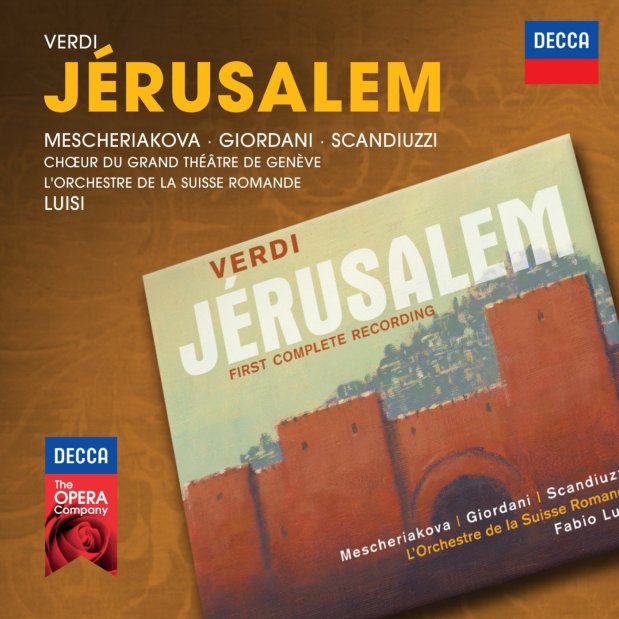 Didn’t have time to eat before the opera? Don’t worry, at least not if you visit a performance at the Israeli Opera in Tel Aviv. In the huge foyer downstairs there are at least fifty food stands and each floor counts dozens more. You can enjoy everything the good earth (and the cook) has to offer: sushi, sashimi, pasta, pizzas, grilled salmon, sandwiches, salads, fruit, cakes, chocolate ….. As a Jewish proverb says: “They tried to killed us, we survived, let’s eat”.

Surviving at any cost, also (or perhaps mainly?) to be able to avenge your attackers afterwards – that’s what it’s all about, among other things, in Halévy’s La Juive. Especially in David Pountney’s production, which was first performed two years earlier in Zurich.

Eleazar is not an amiable man. Like Shakespeare’s Shylock, he is repulsive and pitiful at the same time. He is filled with resentment and is looking for retribution for which he is prepared to sacrifice anything, even that which he loves most. But has he always been like that, or are it circumstances that have made him like that? Moreover, he too knows his doubts – in his great aria he sincerely asks himself (and God) whether he has acted well.

Poutney has moved the action to nineteenth century France, at the time of the Dreyfuss affair, and he is very consistent in that. The production is very realistic, with overwhelming scenery and costumes. On stage there is a kind of rotating puppet theatre, with the cathedral, Eleazar’s workshop, Eudoxie’s sleeping quarters, the prison and the street with the mobs of people. If necessary, the scenes are enlarged, allowing more emphasis to be placed on details. 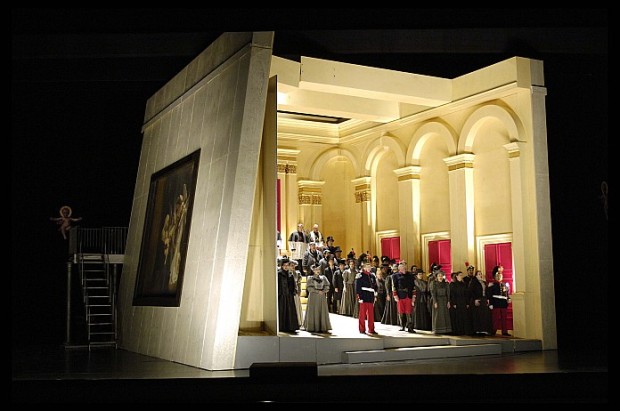 Every scene starts behind a transparent curtain, which makes the image blurred like a kind of veil and therefore a bit unreal. After a few minutes the curtain is lifted and the image not only becomes clear, but it also hurts your eyes.  Well thought out.

The ballet (choreography Renato Zanella) is an essential part of the story. In a very realistic (and very logical) way a story of persecution and intolerance is told and a link is made between the devil and the Jew. Devil is Jewish, expelling the devil means destroying Jews. It is painful for the Israeli public, after all, they have experienced quite a lot here.

The fact that the premiere took place one day after Yom Hashoa (Holocaust Day) makes it all even more complicated. The emotions are not only tangible but also visible. Let’s say: it is an experience to see the opera right here.

There were no less than 10 performances, they worked with a double cast and for the role of Eleazar even three tenors were engaged.

Neil Shicoff is probably the best Eleazar in the world at the moment. He seems to have a patent on that role and has grown so much that you sometimes forget that he is not Eleazar. His voice – slightly nasal and with a cantoral timbre – may not be the most beautiful anymore, but what he does with it is extremely impressive. After his big aria he got (rightly so!) a quarter of an hour of applause and many a handkerchief was brought out.

Annick Massis was born to sing Eudoxie. She tosses of her coloratura with effortless brilliance and her height was pure and scarily beautiful.

Roberto Scandiuzzi (Cardinal Brogni) did not only impress with his deep, dark bass, his entire appearance was impressive and his actions deeply human.

Robert McPherson has a beautiful, light tenor with a ‘Flórez-timbre.’ He did beautiful things with it, but he was one size too small for Leopold’s role.

The star of the evening was the performer of the title role, Marina Poplavskaya. Her voice has grown considerably, and has also become darker. The way she shaped the role was unbelievable, and her entire appearance and acting skills are of an unprecedented quality. Her Rachel was brittle but also determined. Sad and proud at the same time. Not only the victim but also a real heroine. BRAVA!

The orchestra, slightly messy at the start, was skilfully conducted by Daniel Oren. That he is a real singer conductor was clearly visible (and audible), he breathed (and sang) with them.

Oren cancelled the performance on 16 April and was replaced at the last moment by his assistant, also choral conductor, Yishai Steckler. He was certainly acceptable and inoffensive, but the performance lacked the tension of the Oren one.

Also the second, quite good cast did not reach the insanely high level of the premiere. Except for the Leopold – Mario Zeffiri had an even bigger and stronger voice, very agile as well. But as an actor he had to acknowledge his superior in McPherson.

John Uhlenhopp has a beautiful, dramatic tenor, but Eleazar came too soon for him, he still has to grow into the role. The same goes for Dmitry Ulyanov (Cardinal). He has a voice out of thousands, but is simply too young for that role. Moreover, between him and Rachel (a truly beautiful Karine Babajanyan, she can’t help Poplavskaya set the bar so high!) there was no chemistry at all, so one of the most moving scenes made little impression.

Neil Shicoff as Eleazar in Vienna 2013 (production of Günter Krämer):