I love Khovanschina very much. The music is a combination of Russian folk songs, religious chorales, moving arias and glowing orchestral splendour and presents us with a masterpiece of an altogether unprecedented beauty. The libretto, based on historical facts, tells of religious strife, struggles for power, political manipulations, sectarianism and a collective suicide. The chorus plays a fundamental role, but the six leading roles are also particularly well developed as to their individual psychological developments.

The opera had its premiere in 1886, in Rimsky-Korsakov’s abridged version: Mussorgsky had left the score unfinished. In 1959, Shostakovich orchestrated the original piano arrangement. That version, with the ending recomposed by Stravinsky, is almost always used nowadays.

The conductor Boris Khaikin, who was very popular in the post-war Soviet Union, is mainly known for his recordings of Russian operas, including Khovanshchina.

He already recorded the opera in 1946, with the unsurpassed Mark Reizen as Dosifej.

For the curious: you can find the complete recording on YouTube.

In 1974, Khaikin recorded the opera again, this time with Alexander Ognivtsev as Dossifej, Aleksey Krivchenya as Chovansky and Vladislav Piavko as his son.
Golitsin was beautifully performed by Aleksey Maslennikov. Anyone still looking for an example of a tenor from the ‘old Russian school’? Listen to Maslennikov!

The real star of the recording, however, is Irina Arkhipova. As Marfa, she is absolutely unequalled in my opinion:

If you are used to Shostakovich’s instrumentation, Rimsky-Korsakov’s version feels a bit strange. More melodious, almost fairy-tale like. The overture could just as well have been an introduction to Shéhérazade. Rimsky-Korsakov has taken the sting out of it. Unintentionally, it makes you think of old films in which even the greatest misery has been put through the technicolour filter.
In this version, Marfa’s prophecy also sounds rather bland. Mild and not very threatening, which makes it difficult to understand Golitsin’s terrified reaction.

A year earlier, in 1973, Boris Leskovich conducted the opera in Rome. In Italian. Despite the fact that he used Shostakovich’s version, the result is rather light and it does not “smolder”anywhere. It also lacks the “width” in the overture, but that may also be due to the poor sound quality.

As a bonus, you get the complete fifth act with Boris Christoff as Dosifej in a recording from 1958 conducted by Artur Rodziński. Also in Italian (Irene Companez’ Marfa sounds just like Azucena here), but with a significantly better sound quality. (BellaVoce BLV 107.402)
Different label, same recording:

The much-lamented Bulgarian conductor Emil Tchakarov (he died of AIDS at the age of 42) recorded Chovanshchina in 1990, with the best Bulgarian voices available at the time, including – how could it be otherwise – Ghiaurov in the title role.

Nicola Ghiuselev is an excellent Dosifej, Alexandrina Milcheva a very charismatic Marfa and Kaludi Kaludov a very lyrical Golitsyn. He stands with both feet firm in the Russian tradition, but at the same time sings with a large dose of Italianitá.
Tchakarov keeps the orchestra very transparent. (Sony S3K 45831)

The recording can also be found on You Tube.
Below act 1:

In 1989, Abbado conducted the opera at the Vienna State Opera. Alfred Kirschner’s direction and Erich Wonder’s staging are real masterpieces. Anchored in tradition, with a great eye for detail, strong direction of the characters and a well-developed mise-en-scène. The final scene is a dramatic climax, leaving you riveted to your seat, gasping for breath.

In Barcelona (May 2007), the opera was presented in yet another version. Although the orchestration used was that of Shostakovich, the ending was recomposed by Guerassim Voronkov.

Norwegian director Stein Winge says the story is set in the 1950s, but it could just as well be 300 years ago. Or the here and now. His images are timeless and very evocative.

Vladimir Ognovenko is an excellent Chovansky and Vladimir Vaneev a ditto Dosifej. Vladimir Galouzine is without doubt one of the best Andrews I know, if not the best. With Robert Brubaker, Golitsyn sounds less lyrical than usual, but the character does gain character. Graham Clarke provides the comic note as the writer (Opus Arte OA0989 D)

Excerpt from the production:

Kent Nagano’s well-conducted and Dmitri Tcherniakov’s extraordinarily excitingly directed Munich production of Chovanshchina unfortunately has two misfits. Paata Burchuladze (Chovansky) whose career by then has lasted for too long and Doris Soffel (Marfa), whom I love very much, has ended up in the wrong opera. Not for a second can she convince me that she is a young, sexy woman. A real pity, because otherwise the production is strongly recommended.

Anatoli Kocherga is a magnificent Dosifej and Klaus Florian Vogt a ‘creepy’ Andrej. John Daszak, like Brubaker, is a ‘character Golitsyn’ and Camilla Nylund a dreamy Emma.

Tcherniakov portrays the three clashing currents – the conservative, the power-hungry and the progress-seeking – very well. The confrontation between the three rulers is chillingly exciting. Unfortunately, the tension weakens towards the end, so that the last scene feels like an anticlimax. (EuroArts 2072424) 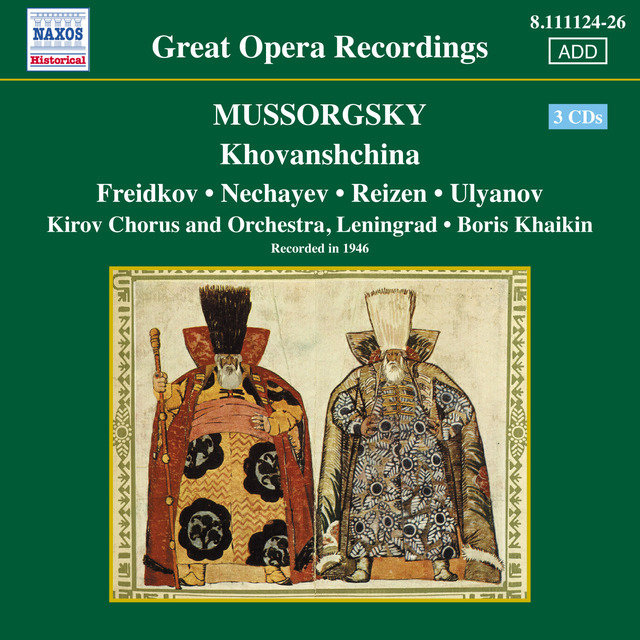