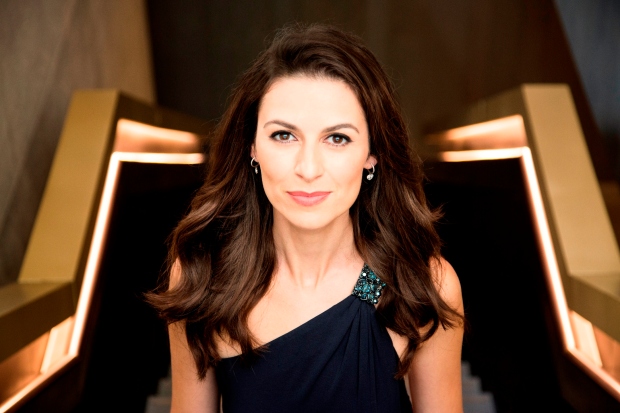 In march 2015 Chen Reiss appeared on the stage of the National Opera in Amsterdam. She kindly took some time off from her heavy rehearsal schedule to answer my questions.

The evening we meet in the canteen of the National Opera, Chen Reiss is tired, very tired. It was a long day of rehearsals, from 10:30 until 18:00!!! With a break, but nonetheless…

She had arrived in Amsterdam six weeks earlier to study Pamina in Die Zauberflöte, and Simon McBurney’s staging requires great physical efforts of the entire cast.

Not easy, especially not if you happen to be a mother as well, travelling with a daughter who is almost two years old. It is impossible to keep up with the daily news this way, which is a blessing, in a way, because most of that news does not exactly cheer Reiss up.

“I am extremely pessimistic and scared. As a Jewish and an Israeli woman I feel less and less at home in Europe. I am deeply worried, and fear everything will go awry. Not a very nice perspective, certainly not for a parent. Fortunately enough I am too busy to listen to the news. I have breakfast at eight, with my daughter, after which rehearsals start. In the evening, when I get home, it is simply too late. I am tired, and often I need to study…”

“I love Mozart with all of my heart: his sacred music perhaps even more than his operas. Those works I love singing above everything else, the music is so beautiful! Full of passion, but stylish and elegant at the same time. Which Mozart roles I love the most? Ilia (Idomeneo), I think, but in fact I love them all equally!”

“Pamina passive? I don’t believe so, on the contrary! She is extremely brave and full of initiative. So much is happening to her. First she is kidnapped, then almost raped. Then her mother tells her to kill her own father. When she refuses she is scorned and cursed. She then escapes rape for a second time…  Just when you think not much else could happen to her the man she loves no longer wants to speak to her! She goes to hell and back and gets so desperate she can only think of suicide. The decision to undergo the trials and follow the man she loves to the end was made entirely by herself.  She is a hard act to follow!”

Is it eternal love, I ask?
My question makes her laugh out loud. In opera, which love is not eternal, after all?

Reiss finds the Amsterdam production by Simon McBurney truly charming. “It all looks very exciting and beautiful, and in addition I work with fantastic colleagues. And this is the third time I get to fly! 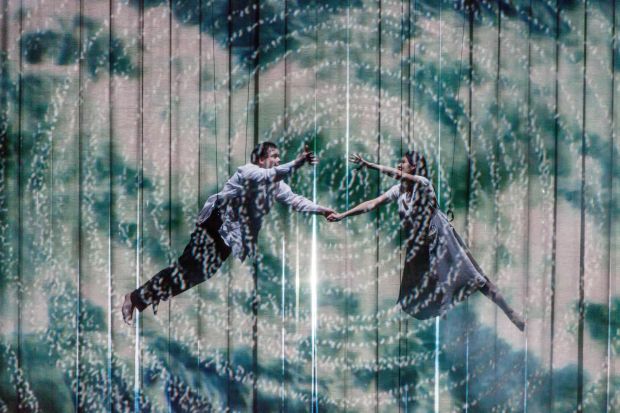 In Vienna I was a very high flying Waldvogel in Siegfried, which not only gave me high anxiety quite a bit but made it hard for me to follow the conductor as well ….  In my last Idomeneo production I was lifted into the air for a moment, which was rather fun.

Trailer of the Viennese Idomeneo:

“Do I ever refuse a role? Yes, surely, but only when it does not suit my voice. It is harder to decide which productions you should avoid. Often you do not know the concept until a week before rehearsals start. Then it is too late to refuse. Refusing anyhow is difficult, because you no longer will be booked, especially if you are a young singer.

This also happens to great stars, by the way. Anna Netrebko recently left a production because she could not agree with the director. Apparently it is easier to replace a world famous singer than a director. The director is felt to be the most important figure, and everything revolves around him or her.”

“I was once made to wear a very heavy hat, which physically I could not do. Not even a letter from my doctor helped: I was fired, and the concept remained. Will this ever change? Who knows. Perhaps if people would stop buying tickets?”

Chen Reiss is also very popular with audiences who never go to the opera or to classical concerts. She sang  Et Incarnatus Est  in 2014 in front of the Pope during the Christmas Eve Mass in the Vatican. One of the papers the next day came up with the following headline:  ‘How a Jewish Israeli soprano found holiness in front of the Pope’.

Chen Reiss performing at the Christmas Mass at the Vatican’s St. Peter Basilica.

“It was a special experience, yes. I only met the Pope very briefly, not longer than thirty seconds, but he sent me a long thank you letter afterwards. Really special. It moved me a lot, and gave me a warm feeling. I also believe the Pope genuinely loves music, he knows so much about it!”

“Why I was invited? Two years ago I sang that piece during the Sacred Music Weeks in Vienna, and I believe he heard me there. Or someone told him about me, because shortly afterwards I got the news I was selected to sing during the mass.”

Reiss’s discography includes five solo albums, amongst others. One of them is Le Rossignol et la Rose. I tell her how incredibly beautiful and moving I find that CD. She is genuinely happy with the compliment.

“I selected the songs and made the program myself, which is all about love, pain and sadness, but about happiness as well. When I was selecting the program I was happily in love, but during the recording sessions my partner and I broke up. I was devastated, and even thought of giving up entirely, but I did finish the recording. That was the right decision, because the recording sessions had a therapeutic effect on me which was beneficial. They helped me so much, in fact, that I opened up to something new and met my current husband. So things have come full circle. For this reason, the CD is very dear to me.

I would love to record more, which is something I will soon do, in fact: first Bach cantates, followed by more Lieder. Yes, all for Onyx. Such a great company! They are very helpful and sweet, they simply let me do whatever I wanted for the Rossignol disc.

In the future I intend to focus more on concerts and recitals. I have discovered that that is what I love doing the most. I will sing the Sieben frühe Lieder by Berg soon, and then perhaps the Vier Letzte Lieder by Strauss.”

“I love Amsterdam dearly. On my first visit here I sang Mahler’s Fourth Symphony, with the Radio Philharmonic Orchestra under Markus Stenz. He is such an incredibly lovely conductor!

At that time I already wished I could stay a little longer in the city. It is so strikingly beautiful, for me it is the most beautiful city in Europe, perhaps even in the world. There is so much culture too: the Concertgebouw, the museums…. And the people here are very friendly. I enjoy all of that very much. 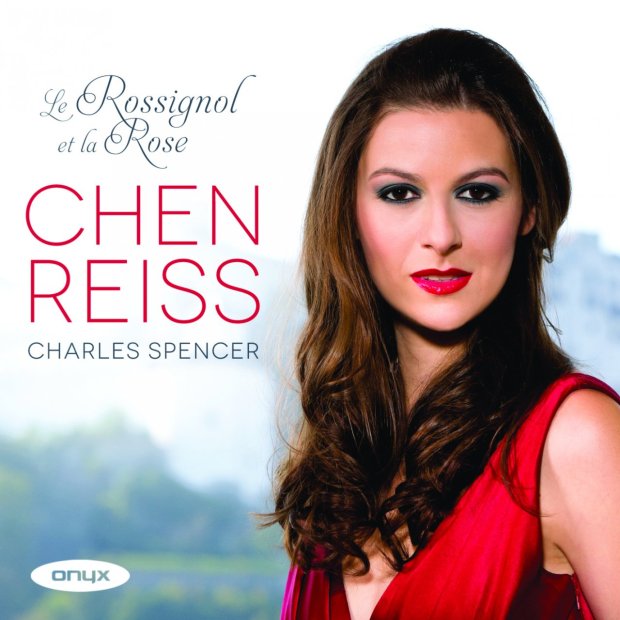 This recital-cd is a fine example of a perfectly put together recital. Like a nightingale and a rose, it is a match made in heaven.

The recital’s motto: “The nightingale has sung throughout the night, making the roses spring up by the sweet sound of her echoing song” introduces a story in five chapters; a story of love, longing, loneliness and sorrow. And humor too, because even in foggy romanticism funny things do occur occasionally.

The title of the CD is taken from Saint Saëns’s vocalise. In this song Reiss presents her full potential on a platter, which is quite something.

I was particularly moved by ‘Die Nachtigall’ by Krenek, a song I did not know, and would not associate with this composer straight away. The beautiful text is by Karl Kraus, a poet who, according to Krenek,  had a great influence on him. Reiss makes you gasp in admiration, her high notes are both impeccable and sweet.

Bellini’s ‘Vanne o rosa fortunata’ is a lovely piece of fluff, but it is impossible not to be moved by ‘La Rosa y el sauce’ by Guastavino. It is a song about a rose which blossomed in the shadow of a willow, but which was plucked by a young girl, leaving the willow to mourn. Reiss grieves with the willow, and so do we.

In ‘Shnei shoshanim’ by Mordechai Zeira Reiss shows the darker side of her voice. She reminds me a little of Nethania Devrath, one of the most famous Israeli sopranos from the sixties, with Victoria de los Angeles not looming far in the background.

Pianist Charles Spencer is truly the saving angel here. He is much more than just an accompanist. Listen to his intro to Krenek’s ‘Die Nachtigall’ or to his pearly notes in Meyerbeer’s ‘Rosenblätter’. BRAVI! 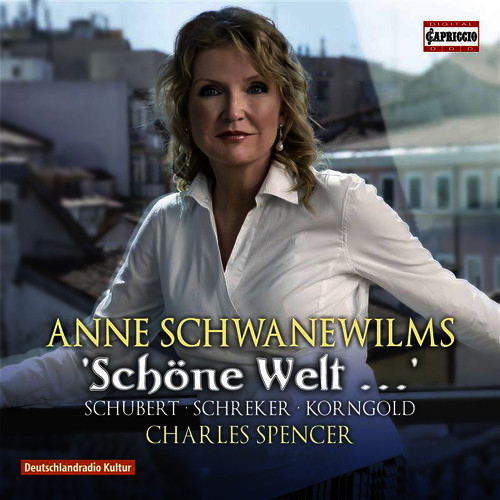