I never used to like opera. I loved violin concerts and piano solo works, very early on I learned to appreciate chamber music and when I got a bit older, songs also came my way. But opera? The mere idea that an old, fat lady would try to portray a young girl dying of TB, gave me the giggles. Talk about prejudice!

Until one memorable evening in 1982, when I turned on the TV to watch Carmen. I only did it to please my then boyfriend and then it happened! From that night on, the world was forever changed and my life gained a great love.

For years I cherished this Carmen, although I only had a badly copied but very expensive mc (does anyone remember what it was?). It was later released on various ‘pirate labels’ and finally on DVD (Arthaus Musik 109096).

Many years and a lot of experience have passed, but I still find the recording irresistible. First of all because of Domingo. Listen to his ‘La fleur que tu m’avais jetée’: if that doesn’t give you goose bumps, I don’t know what will. And also because of Carlos Kleiber, a conductor, the likes of whom do not exist anymore these days.

The most beautiful CD recording, at least to me, is the one with Teresa Berganza under Claudio Abbado (DG 4196362). It was recorded in the studio in 1978, but only after a series of live performances, and it is all the better for that! Ileana Cotrubas (Micaela) and Sherrill Milnes (Escamillo) complete the excellent cast. Two years earlier, Domingo also recorded the opera in the studio (Decca 4144892), but I am less enthusiastic about it. Solti conducts superbly and Tatiana Troyanos as Carmen is one in a thousand, perhaps she is even better than Berganza, but José van Dam is no Escamillo and the whole lacks the atmosphere of the theater.

The very first recording I know, dates from 1967. It is from the Teatro Municipal de Santiago and is conducted by Anton Guadagna (Legato LCD 194-2). Regina Resnik is an excellent Carmen, but what makes the recording truly memorable is the Escamillo of Ramon Vinay, once a Don José of note himself.

Also interesting is the recording from Covent Garden, 1973 (Arkadia MP 498-3). Mainly because of Shirley Verrett in the leading role and the very young Kiri te Kanawa as Micaela.

Werther was one of the young Domingo’s favourite roles. Unfortunately, little of it has been documented. On 18 December 1977, the opera was recorded by the Bayerische Rundfunk in Munich. This recording has been released on CD (Orfeo C 464 982).
Charlotte was sung by Brigitte Fassbaender, not really a singer one would associate with the role… Well! Allow yourself to be surprised, because what happens here, happens very rarely: drama, passion, love, despair… She and Domingo really bounce from your player.
An excerpt:

A studio recording of the opera was made in 1979, under Riccardo Chailly, with a totally miscast Elena Obraztsova as Charlotte. It is quite exciting, but lacks the necessary poetry.

Yes, Manon was once part of Domingo’s repertoire. The only recording I know is on Melodram (MEL 27054). It was recorded live at the New York City Opera on 20 February 1969. Manon is sung by the truly irresistible Beverly Sills. Julius Rudel conducts.

An oddity, certainly, but such a beautiful oddity! Sony (7454942 – check the number to be sure, they change so quickly!) recorded the concert performance in New York, 1989, live. Eve Queler conducts and Grace Bumbry shines as Chimene.

Fortunately there is a good studio recording of Domingo’s Faust. It was recorded in 1979 by EMI (now Warner) and it is easily one of the best recordings of the work. The orchestra of the Paris Opera is conducted by Georges Prêtre, one of the best conductors of French repertoire.

The cast is finger-licking gorgeous: Mirella Freni is a fragile and sensual Marguerite and Nicolai Ghiaurov a very impressive Méphistophélès. In the small role of Valentin we hear none other than Thomas Allen.

EMI (now Warner) recorded the opera in Paris in 1991. The conductor was Myung-Whun Chung and there is the rub: he does not really know the opera. But he was not the only culprit! Someone came up with the unfortunate idea of having Dalila sung by Waltraud Meier. Forget it.

The other studio recording, this time on DVD (DG 0730599), also has a Dalila that just doesn’t work for me: Olga Borodina. It was recorded at the Metropolitan Opera in 1998. I was there and didn’t like it – and I still don’t like it.

But, I’ll go for the San Francisco recording every time! It was directed by Nicolas Joel and Dalila was sung by the really sexy Shirley Verrett (Arthaus Video 100 202) 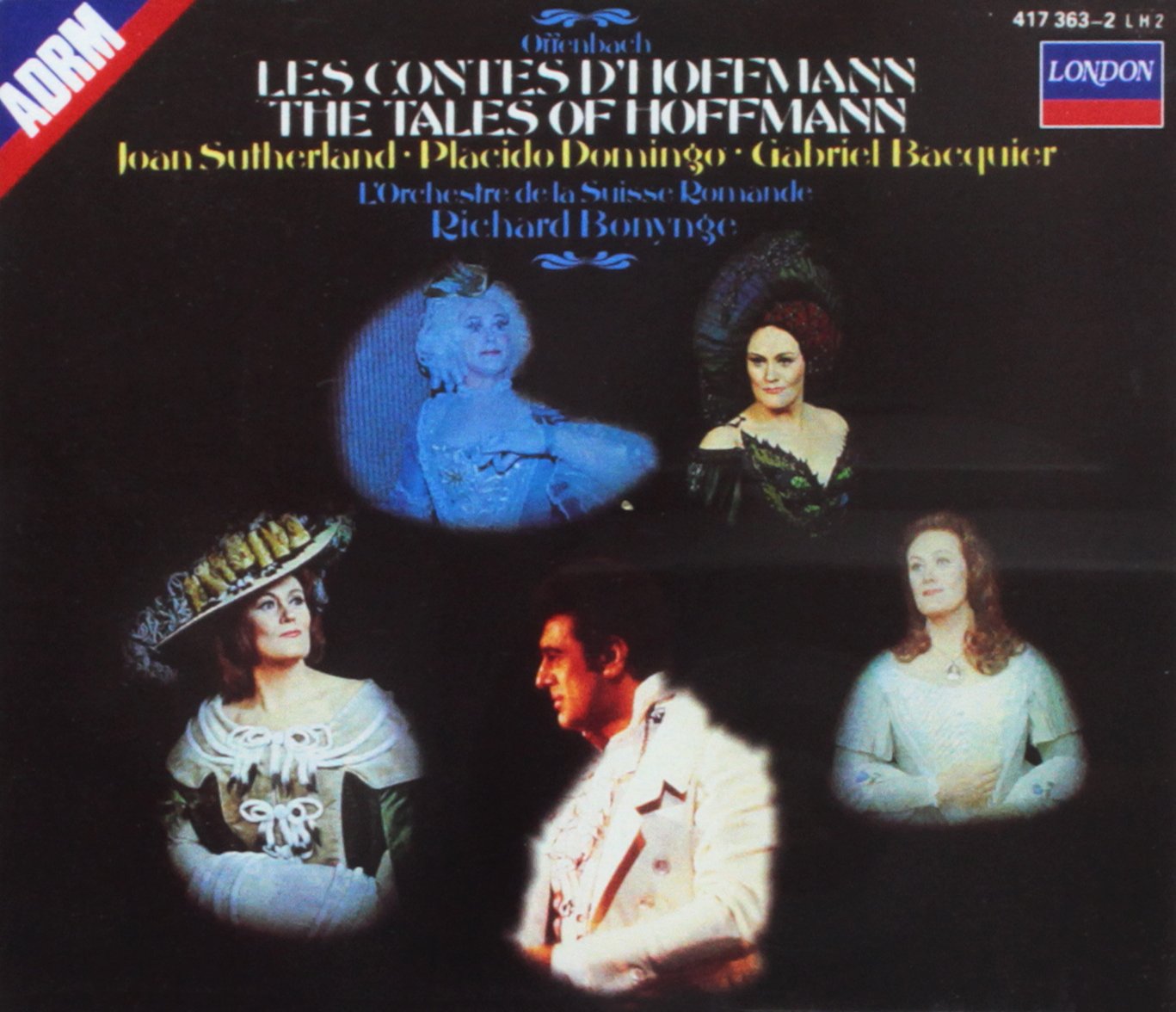 Hoffmann was one of Domingo’s greatest roles. As far as I am concerned, no other singer even comes close to him.

If you want the opera on CD, the Decca recording conducted by Richard Bonynge, with Dame Joan Sutherland in all three female roles (4173832) is highly recommended.