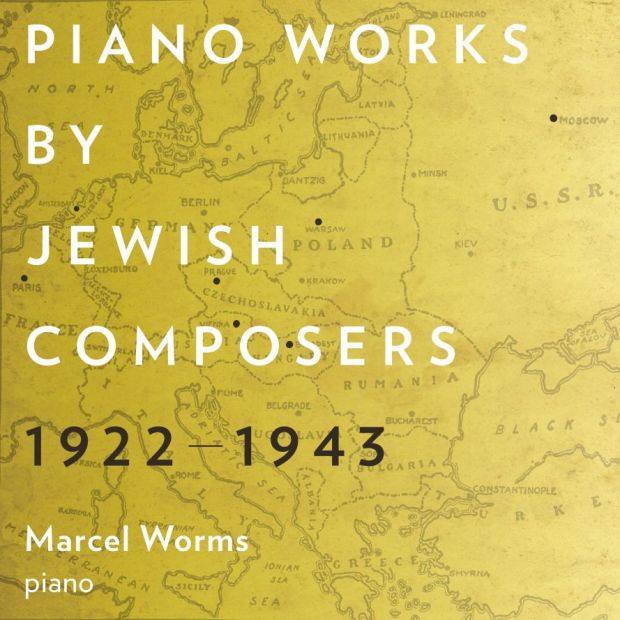 We can safely call Marcel Worms the ambassador of persecuted and forgotten composers. For his latest CD, he has recorded piano works by composers from various European countries: the Netherlands, Poland, Hungary, Czechoslovakia, France and Austria. Not only the countries of origin are different, the compositions written between 1922 and 1943 also vary a lot. From jazzy and swinging through romantic, virtuoso and modest to an attempt at serialism.

The composers all have one factor in common: they were Jewish and all but three (Weinberg, Laks and Urbancic) did not survive the war. Weinberg fled to the Soviet Union, Urbancic (who was not actually Jewish but his wife and children were) to Iceland. And Laks was very lucky to survive Auschwitz, as the bandmaster of the camp orchestra.

The CD starts spectacularly with ‘Blues’ by Szymon Laks. It is unknown when this wonderful work was composed. For myself, I think of the early 1930s. Dick Kattenburg’s ‘Novolette’ from 1941 fits in perfectly with this work. As well as the very rhythmic ‘Toccata’ by Paul Hermann.

The ‘Prelude’ by Mischa Hillesum (Etty’s brother) is another story. The composition is strongly anchored in romance: never are Chopin and Rachmaninoff far away; and the two Hommage-pieces (to Sherlock Holmes and to Remmington) by Leo Smit, that you can’t actually ‘store’ anywhere, are simply delightful.

Victor Urbancic is a big unknown to me, it is the first time that I hear from him. That is not very strange: his compositions are completely forgotten and the 1922 ‘Sonatine’ has its recorded premiere here. I don’t really love it, which may be due to my unfamiliarity with his idiom.

What I really do love is the irresistible playing by the pianist. Marcel Worms plays as if his life depended on it. Full of conviction and a real pianistic zest.