Perfect goodness, does it have the right to exist? In his novel Billy Budd, Herman Melville set the absolute evil against the perfect goodness and made them perish both.

The story about the angelically beautiful, honest but oh so simple and naive Billy, that takes place on a ship with only men and between men, has of course always had a double meaning. Some things could only be implied. Maybe that was a good thing, because it produced some real masterpieces.

One of them was a film by Peter Ustinov starring Terence Stamp.

Below is a trailer of the film:

And one of the best, at least for me, operas of the twentieth century.

For Benjamin Britten it was a rewarding theme. Elements such as the individual versus society, corruption, sadism, despair, a sense of responsibility and, of course, homo-eroticism were often used by him in his works. He was also able to include his pacifist ideas in them.

The story can be told quickly: Billy Budd is accused of treason by Claggart, the Master-at-Arms. He then strikes his accuser dead, and is sentenced to hang by Captain Vere. However, in the background, feelings of love, powerlessness and revenge play the real leading role.

For Claggart, the personification of evil, it is clear that he must destroy beauty, otherwise it will be his own downfall. “Having seen you, what choice remains to me? With hate and envy, I am stronger than love” he sings in his big, almost Iago-like aria ‘O beauty, o handsomeness, goodness’.

Captain Vere, aware of his true feelings for the young sailor, doesn’t have the courage to save his life. Only years later, looking back at the events of that time, he realizes that he should have acted differently.

Billy Budd is a role that is traditionally played by a (very) attractive singer. He has to be, he is not called a ‘beauty’ and a ‘baby’ for nothing. He is almost always put on the stage partially or even completely shirtless – no wonder that almost all of the baritones that are labeled as the ‘hottest’ have the role on their repertoire nowadays.

Britten himself is not entirely blameless in this. His very first Billy, Theodor Uppman, was personally selected by him for his exceptionally attractive appearance. Not that he couldn’t sing, on the contrary! The American baritone had a very pleasant, warm timbre, in which naivety went hand in hand with hidden sex appeal.

The world premiere took place on December 1, 1951 in the ROH in Covent Garden and the recording of it has fortunately been preserved (VAIA 1034-3). It is particularly fascinating to hear the voices of the singers for whom the opera was originally created.

The role of Captain Vere was written for Britten’s partner, Peter Pears. Not the most beautiful tenor voice in the world, but one with character, body and great ability to express things. The role of Claggart was sung by a good (but no more than that) Frederic Dalberg and in the smaller roles of Mr. Redburn and Mr. Flint we hear the future greats: Geraint Evans and Michael Langdon. The sound quality is amazingly good.

In 1952 Billy Budd was recorded with Upmann in the lead role for television. There is a video recording of it:

In the sixties Britten adapted and made his opera tighter: he turned the four acts into two. The new version had its premiere in 1964, under Georg Solti.

In 1966 the BBC recorded the work in their studios for TV and a while ago it was released on DVD (Decca 0743256). The role of Captain Verre was again sung by Peter Pears, now audibly older, but also more experienced. And he is helped by the images: his portrait of the desperate and guilty old captain is of an unprecedented intensity.

For the role of Billy a young English baritone, Peter Glossop, was asked – it has been said that Uppman had by now become visibly too old for the role. It is also said that Britten was considering asking Fischer-Dieskau for that role. I don’t know if it’s true (since Britten himself wanted a handsome young man for the role, the rumours seem to me to be no more than rumours), but imagine! I don’t even want to think about it!

Glossop is much rougher than all the other Billy’s I know, he is also on the robust side, but it’s nowhere disturbing. It’s hard to call him a ‘baby’, but he’s very attractive and he has the power to kill someone with a slap of his arm.

Michael London has been promoted from Mr. Flint to Claggart, a role that fits him like a glove. In the smaller roles we meet again singers of name: John Shirley Quirk (Mr. Redburn), Benjamin Luxon (Novice’s Friend) and as Novice a truly inimitable young Robert Tear.

The London Symphony Orchest is led by the ever-reliable Charles Mackerras.

It is filmed in black and white and the very realistic images make you feel as if you are in the middle of an old classic, which is of course true. It is a movie. It’s certainly fascinating and a must, but of course not comparable to a live performance in the theatre. 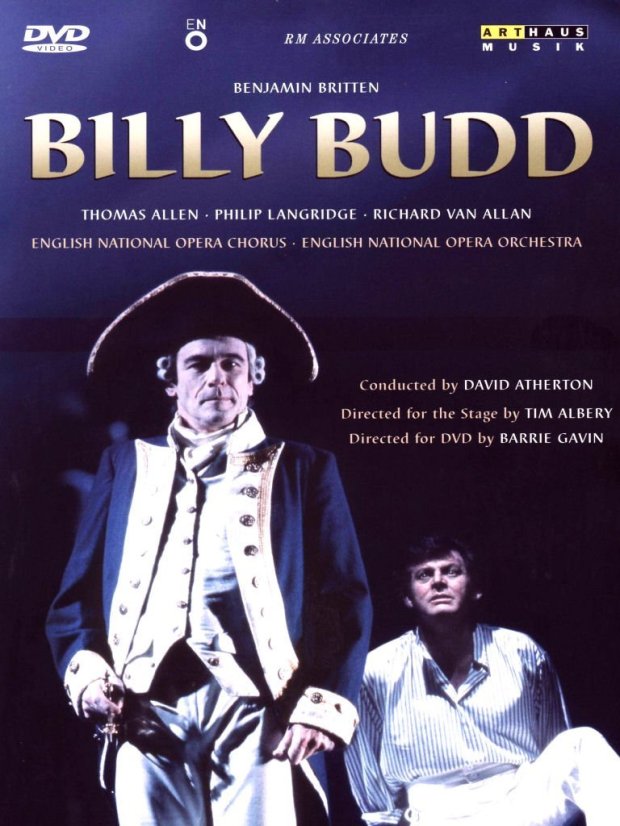 It took almost 20 years before the next Billy presented himself, at least on an official document: in 1988 Tim Albery staged the opera at the ENO (Arthaus Musik 100 278).

The production is both visually and musically very strong. The production is tight and to the point, the images speak to the imagination and the libretto is followed very faithfully. Here no spectacular shots: it is also simply filmed in the house.

As for the performance … Well, the big word has to be said: it’s the best ever and I just can’t imagine that it will ever be matched again.

Thomas Allen is Billy. He has everything to make the role his own and he will probably be associated with it for eternity. He has the looks, he can act and he has a voice that makes you melt. His “Look! Through the port comes the moonshine astray” (he was the first to include the aria in his song recitals – now every baritone does it) can’t leave you unmoved.

Philip Langridge (Vere) convinces me even more than Peter Pears and Richard Van Allan seems like a devil in persona. The English National Opera Orchestra is outstandingly conducted by David Atherton.

Below Thomas Allen as Billy: 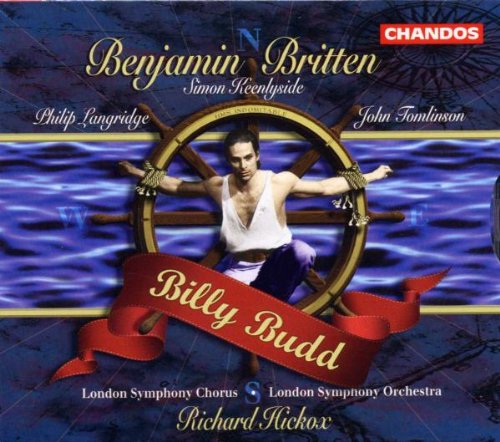 12 years later, in 2000, the opera was recorded “semi-live” for Chandos (CHAN 9826(3)). That is to say: it was recorded in the studio, but after a series of concert performances in the Barbican Hall.

Richard Hickox is an excellent conductor, but no match for Atherton or Mackerras. But the cast is again sublime and if I could take one opera CD to a deserted island then the chances are that it will be this Billy.

John Tomlinson is probably the strongest of all Claggarts ever, especially vocally. What a dominance and what an authority!  Philip Langridge repeats his brilliant Vere and Simon Keenlyside is, at least for me, one of the best Billys after Thomas Allen.

He is less naive than Allen, tougher than Uppman but much softer than Glossop. He is the goodness … So beautiful! Mark Padmore deserves a special mention as Novice.

Below Simon Keenlyside as Billy:

In 2008 the opera was recorded by VirginClassics (50999 5190393). The London Symphony Orchestra was conducted by Daniel Harding. Definitely good, but more beautiful than the recordings above? Well, no.

Here the role of Billy is sung by one of the greatest American ‘barihunks’ of the moment, Nathan Gunn. I’ve heard the singer live a couple of times and I know how charismatic he is, but I’d rather choose one of his colleagues. His Billy is too self-confident for me, too present too.

Gidon Saks has a great voice, but it’s not enough for Claggart. Besides, he sounds too young. And I can be brief about Ian Bostridge (Vere): mannered. Like everything he touches, his Vere is his narcissistic alter ego instead of a character from the story.

If the recording hadn’t come out on CD but on DVD, I probably would have liked it better, especially because of Nathan Gunn’s part, because optically he is really more than admirable.

Below Nathan Gunn as Billy: 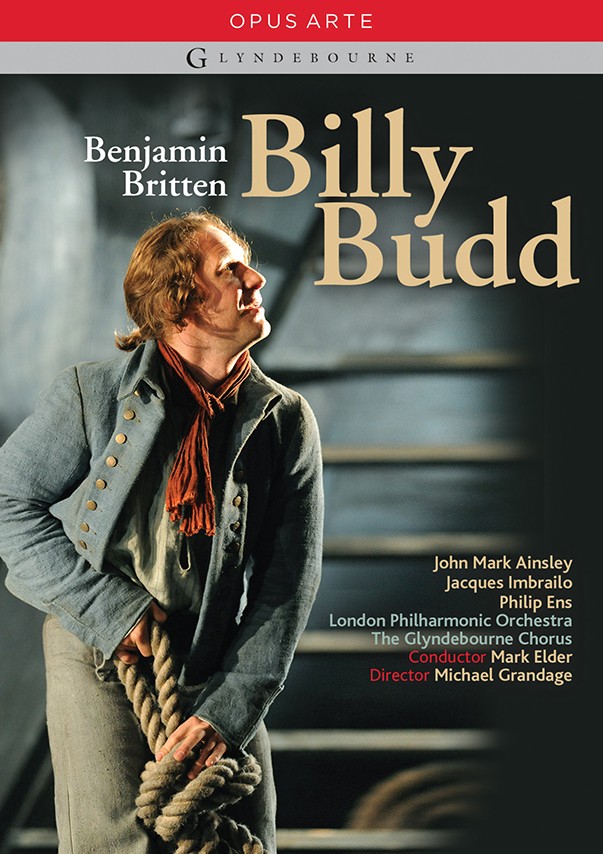 In the production of Michael Grandage (Opus Arte OA 1051 D) recorded in Glyndebourne in June 2010, we are actually on the military vessel, in the middle of the sea. The time of action is also clear: the eighteenth century.

The costumes are very realistic and everything that happens on stage is also in the libretto. The decor is beautiful and leaves a overwhelming impression. Here one can only utter ‘oh’ and ‘ah.’ But it is not only the entourage that impresses. Michael Grandage, who makes his opera debut with this, creates an atmosphere that is psychologically quite charged. The tension is excruciating. I can’t stop talking about how he directs the characters either. You rarely experience such an intelligent production these days.

We witnessed Jacques Imbrailo’s phenomenal Billy in Amsterdam in March 2011, but here, also thanks to the close-ups, he impresses even more.

John Mark Ainsley is inimitably good as Vere and Philip Ens convince as the evil spirit Claggart. Ben Johnson is a very moving Novice and Jeremy White a more than excellent Dansker.

Below is Jacques Imbrailo as Billy: