Harold Prince, with no less than 21 Tony Awards to his name, one of the biggest (if not the biggest) musical producers/directors, tackled ‘Turandot’ (Arthaus Musik 107319) in 1983, with very impressive results. He created a world of illusion ruled by fear, where the inhabitants, dressed in dazzling costumes, hide themselves (and their true feelings) behind masks. Beautiful and terrifying at the same time.

Eva Marton sings a phenomenal Turandot and Katia Ricciarelli is a fragile, pitiful Liù. Her “Signore ascolta” spun out with the most beautiful pianissimi is heartbreaking.

And José Carreras… He makes me cry too, because at the age of 37 he had one of the most beautiful (lyrical) voices in the world. But Calaf was not his role. He sings it beautifully, but one hears him crossing his own boundaries. And yet …. His hopeless macho behaviour, which goes against all odds, not only fits the concept of the director, it also illustrates Calaf’s character perfectly. At least for me.

The orchestra from Vienna is conducted by Lorin Maazel. Not my favourite conductor, but in this case, I have no reason to complain.

There was a period when I thought I’d had enough of the larger than live productions by Franco Zefirelli. I only thought so, because now I yearn to see them again. All the more so because it was not just pomp and circumstance: Zefirelli was undeniably a very good personal director, with him the interaction between the characters was always perfectly timed as well.

Plácido Domingo is a different story. As many of you know (if not, you know it now) he is my absolute hero and idol, but he is so kind! And sweet! He sings the role better than Carreras (incidentally – neither gentlemen was a champion of high notes). His voice is bigger and stronger, but in terms of drawing a character Carreras wins.

Leona Mitchell (what happened to her?) is a very moving Liù. And her skin colour means you can feel for her as a slave (so not good enough for Calaf). 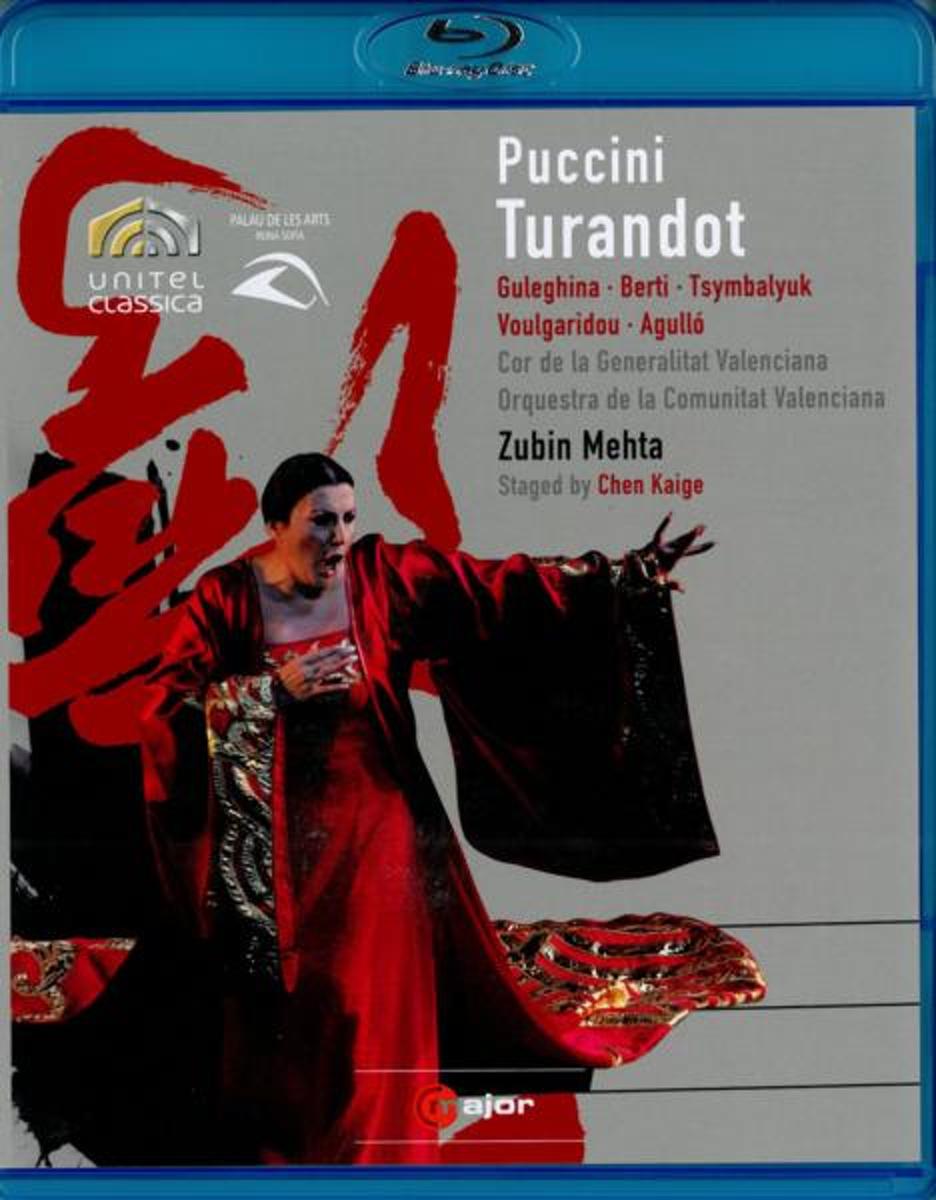 For lovers of fairy tales, stunningly beautiful and colourful costumes, overwhelming sets, and opera ‘as opera is supposed to be’: the production from Valencia, recorded in May 2008, will make your heart beat faster and even with your ears closed, you will enjoy it immensely.

The famous Chinese film director Chen Kaige (a.o. ‘Farewell to my Concubine’) pulls out all the stops and lets you gasp for breath from the very first moment. There is no lack of visual pleasure, which does not mean that it is musically not good.

Maria Guleghina is not the most subtle of contemporary sopranos. She always remains a bit unapproachable and cold, but she has a huge voice and her high notes are as solid as a rock: here we have the perfect interpreter of the title role. Marco Berti is the prototype of an ‘old-fashioned Italian tenor’: straightforward, little movement. However, his sound is also unmistakably ‘old-fashioned Italian’: grand, ringing, with a touch of Bergonzi in his timbre and a beautiful height.

Alexia Voulgaridou is a very moving Liù and the three ministers are extremely convincing.

The orchestra (Orquestra de la Comunitat Valenciana) under maestro Mehta does its best to sound as Chinese as possible, which they do wonderfully well (C Major BD 700404/DVD 700308).

I’m having a hard time with this. I watch and listen to Salvatore Licitra and cannot control my tears. He has never been my favourite tenor, but knowing  that you are watching and listening to what was probably his very last recording (in September 2011 he had a fatal accident on his native island, Sicily), makes judging, let alone ‘enjoying’ this very difficult.

And what can I say about the production itself? It’s a good old Zefirelli, with all the frills, although he does change things a little here and there. But the atmosphere in Verona is to be jealous of, so beautiful.

The moon is lit and you imagine yourself in the middle of a fairy tale. The images are undeniably beautiful and it remains a fascinating spectacle, especially if you are sensitive to it.

And the execution? Maria Guleghina was the reigning Turandot at the time and she is doing very well, but she has also grown older and a certain routine has crept into her voice and her portrayal. I also hear a frayed edge in her heights.

Luiz-Ottavio Faria is a very moving Timur and Tamar Iveri a beautiful, if not really memorable Liu. Difficult (BelAir BAC066).

Do you hate Calaf as much as I do? He has to be one of the most unsympathetic opera heroes: selfish, egocentric and keen on money and power, capable only of loving himself. Once started he can’t be stopped by anything or anyone: neither by the supplications of Liu and his father, nor by the wise words of Ping, Pang and Pong. The world to which he wants to belong is one of glitter and false appearances, where only the outside counts.

Or do you really think he is in love with Turandot?

Sometimes I suspect Puccini deliberately didn’t finish his opera. How do you create a happy ending to a fairy tale that is a series of tortures, murders and suicides?

Maybe I’m not the only one. Director Andrei Serban stops the opera for one long minute after Liu’s death, in which all actions freeze. I am very grateful to him for this, because Timur’s cry for help (“wake up Liu, it’s morning already”) resonates so strongly in your head.

The thirty-five year old production – which, after travelling half the world, returned to Covent Garden in 2013 – has lost none of its beauty and still fascinates from start to finish. The performance, with its beautiful choreography, is a feast for the eyes: dazzling and colourful, with a very dominant colour red.

Marco Berti is a fine although somewhat stately Calaf and Lise Lindstrom sings an absolutely convincing Turandot. Something I unfortunately can not say of Eri Nakamura (Liu).

The young Henrik Nánási has a long way to go before he can call himself a ‘Puccini conductor’. He still lacks a dose of healthy sentiment. But he is capable.

This is not the best performance of Turandot, but perhaps, at least to me, it is one of the most beautiful to watch.

Below is a trailer of the production:

For years the recording with Birgit Nilsson, led by Francesco Molinari-Pradelli (once EMI 7693272) was my absolute favorite. It couldn’t and can’t be better, basta. Until a while ago I re-listened an old CD with Gina Cigna (Naxos 8.110193-94) I had not heard in ages and now I am not so certain any longer.

Both Nilsson and Cigna have great voices with which they can easily handle the role, but Cigna has much more ‘italianitá’. On the other hand there is the icy chill in Nilsson’s timbre, which makes her a personification of the ice princess.

Franco Corelli and Francesco Merli are equally matched: macho and powerful. But Merli sounds a little more distant than the warmer and very seductive Corelli.

Renata Scotto is a very fragile and moving Liu, but so is the young Magda Olivero. Difficult. The choice is yours. Although: who says you should choose?

Finally, a few words about the ‘Alfano ending’. Twenty-five years ago (does time go so fast!?) it was performed at the Vlaamse Opera in Antwerp and since then I’ve become a real fan of it. It’s such a shame that it was never officially recorded!

The CD on which Josephine Barstow sings the original Alfano ending with Lando Bartolini (Decca 4302032) has unfortunately been out of print for years. It really deserves to be re-issued.

Rosa Raisa: from the Bialystok ghetto to La Scala in Milan