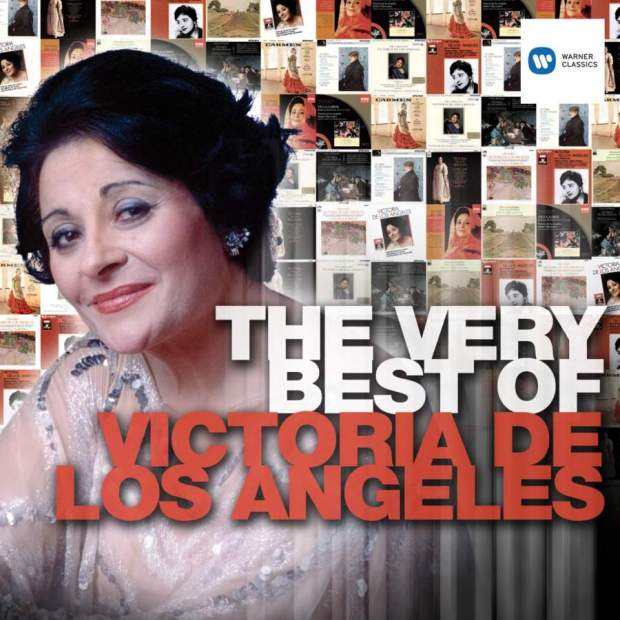 Victoria de los Angeles was without a doubt one of the most beautiful lyrical sopranos of her generation. She made her debut in 1945 at the Liceu in Barcelona as the Gräfin in Le Nozze di Figaro. Her international breakthrough came when she sang Salud in La vida breve by Manuel de Falla in 1948 for the BBC, a role she first performed in a staged performance at the Holland Festival in 1953.

One year later she sang Marguerite in Gounod’s Faust in Paris and after that all the major stages in the world followed.

Her real name was Victoria Lopez Garcia. Why did she choose ‘de los Angeles’ as her stage name? It is not that important, but it fitted her like a glove. Not only did she look like a Spanish Madonna, but her voice was angelic too: gorgeous and of an innocent beauty. Something that made her less suitable for certain roles, such as Violetta. Not that she was bad, but she sounded very chaste.

And yet she was one of the best Manons (Massenet), also not exactly an example of a ‘decent’ woman:

Her voice was not just lyrical, warm and delicate but also very aristocratic, so her Mimi and Cio Cio San were not only fragile and helpless but also got something royal and even Santuzza was enriched with a bit of nobility.

But de los Angeles was more than just an opera diva. In addition to performing in operas, she frequently performed as a concert singer and was a very gifted song singer. It is said that at the beginning of her career, before performing in an opera, she insisted on giving a song recital first. In this way she could first introduce herself to the public as the real Victoria and not as an opera character.

For Spanish songs she has meant as much as Fischer-Dieskau for German songs or Peter Pears for English. She sang everything which was composed in her native country: starting with the medieval songs and the Sephardic romanceros and ending with zarzuelas and contemporary compositions.

Her repertoire was incredibly large. She sang Italian, Spanish, French and German songs and knew better than anyone how to make her own mark on everything she sang. Her Brahms and Mendelssohn are irresistible, and one cannot help falling in love with her ‘Ich Liebe Dich’ by Grieg.

Her loving, somewhat sweet timbre, her suppleness and her ability to colour words made her particularly suitable for the French repertoire. Her Debussy, her Ravel, her Delibes (just listen to ‘Les filles de Cadiz’!) are truly unrivalled.

Hopefully this album is still for sale.